……………………………In the days since I finished reading Emma Hooper’s debut novel ‘Etta and Otto and Russell and James’, I’ve been wondering how to describe it……because it seems to sit somewhere in between a fairytale and a reality trip!

What makes it difficult to describe overall is that there are too many little flights of fancy in the story, such as a talking and country-music singing coyote called James, for it to be utterly grounded in reality and yet there aren’t enough flights of fancy for it to be described as a fantasy or magical realism novel either! Then I decided that it didn’t really matter where it sat between reality and fantasy – who cares – because it’s a charming, beautifully written, wonderful novel. 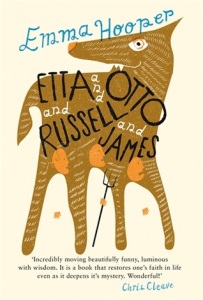 Etta is an 83 year old woman living in Saskatchewan Canada, who wakes up one morning and decides to walk to the sea because she’s never seen the water. And living in Sasketchewan, there’s no quick route to the sea – but as with every journey there’s a short way to get there, going several hundred miles West or there’s a long way to get there, a journey of more than two thousand miles East! Etta’s husband Otto meanwhile, gets out of bed to find a note telling him Etta’s gone for a walk to see the water and he knows from the ‘tightening of the skin on his chest’ that his wife will go the long way. And he’s right.

Otto is left with a pile of recipe cards and his neighbour and life-long friend Russell for company. Etta has a note in her pocket reminding her who she is and where she’s from so that if she ever does make it to the ocean, she might be able to then find her way back home. And from there the novel follows Etta’s journey across Canada picking up first James the coyote, then mild celebrity as her trek hits the media, and then a collection of random objects which people ask her to take along for them on her journey to the sea. Meanwhile, Otto stays home, learns to cook, adopts a guinea pig and waits. And interspersed with the present-day octogenarian journeys of Etta, Otto and Russell, the novel also journeys back over their lives, from near neighbour Russell’s more-or-less adoption into the family of Otto and his 14 siblings, to Etta’s arrival in their lives as the barely-older-than-the-students village schoolteacher. On the way there’s the most beautiful love triangle between Etta, Otto and Russell and there’s Otto’s time as a soldier in the Second World War which is pivotal in the second half of the novel.

Etta's greatest unfulfilled wish, living in the rolling farmland of Saskatchewan, is to see the sea.

......And so, at the age of eighty-two, she gets up very early one morning, takes a rifle, some chocolate and her best boots, and begins walking the 2,000 miles to the water

It’s a novel of many parts and most of them were brilliant. It’s impossible not to read without physically wincing, the grittily real description of Etta’s bleeding, ravaged feet after three days of walking. Equally it’s very easy to go along with the beautifully woven flight of fancy in the French woman Giselle who seems to be in every town Otto’s platoon are billeted in and who whispers to him that he’s a favourite of hers. In between, each of the characters life stories are utterly engaging and so full of emotion that they add a richness to the already wonderful characters Emma Hooper has drawn. I also thought that the continually shifting narrative between Etta’s walk, Otto’s waiting for her, Russell’s searching for her and then back into the stories of their lives was what kept the novel a riveting read for me. If it had just been the story of Etta’s walk I’d probably have given up earlier than Etta’s first pair of boots! Instead I was hooked by these characters all the way. And even though I’m not a lover of books with talking animals, even James the talking coyote worked brilliantly throughout – if you are going to have a talking, singing coyote in a novel then why not give him the great comic timing and subtle wit that Emma Hooper has given to James!

In a book that flirts with magical realism, there was always the chance that some of it would be too much for me. And in places it was. The reappearance of his sister Winnie in the midst of the chaos of war and her interchanging with the mysterious French woman Giselle was one stretch too far for me. Equally Russell as a character got a bit lost for me in the middle of the novel. His search for Etta made perfect sense but for me it happened too soon and after it he faded from the present day parts of the novel.

But these are minor quibbles. Overall I loved this story. There’s an easy charm to it all the way through, and the story of Etta and Otto and Russell’s intertwining lives was just one of those tales that draw you in as a reader and keep you engrossed to the extent you really do believe in these characters so much, you start talking about them as if they are real!!! (I know my family think Etta and Otto and Russell and James have moved into our house, so much have I talked about them!).

It’s also a raw and tender novel in places and in some ways those were the bits of it I loved the most – Otto’s homecoming after the war was one of those ‘read-it-with-the-book-held-high’ moments, so that my fellow commuters didn’t see me crying again!

What struck me most in this book was the way the word ‘OK’ is used to such fantastic effect so frequently. I don’t think I’ve read a book which uses it so often, but it’s wonderful in this novel because it captures the mood of these characters and their attitude to life perfectly – a sort of gentle, drawn out drawl of an “Okay!” – those accepting, straight, uncomplicated ‘Okay’s’ which signal a lack of fuss, a simple power in emotions and relationships and a constant willingness to accept people as they are. So to conclude and paraphrase……..

Etta and Otto and Russell and James is Emma Hooper’s debut novel. It was published by Fig Press in the UK and I bought my copy.

I first heard about this book in a Guardian list of books to look out for in 2015 and then heard a short interview with the author and Mariella Frostrup on the BBC Radio 4 Books and Authors podcast.

Emma Hooper is a Canadian musician and academic as well as an author. She plays viola and is Senior Lecturer in Commercial Music at Bath Spa Uni here in the UK. ( I’ve got most of my family in Canada so I’ve given them a bit of kudos by categorising the book as Canadian Fiction – but as she’s based in Bath and has worked with Peter ‘God-Like-Genius’ Gabriel, I’ve unilaterally decided to adopt Emma Hooper as one of us and so have categorised it as British fiction as well!!!!!)

If you are interested in finding out more about Emma Hooper you can find her website here and she’s on Twitter as @waitress4thbees . In addition there’s an interview she did with the Bookseller and there are other reviews of the book that I’d recommend at both the blog for Leeds Library Service, Leeds Reads, and at Claire Thinking.

Lastly if you like a bit of music with your reading the Bookshop Band have written a couple of songs inspired by Etta and Otto and Russell and James, one of which is below. And if you’ve never listened to the Bookshop Band before ….well you should!

This site uses Akismet to reduce spam. Learn how your comment data is processed.